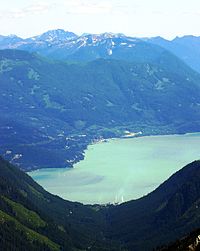 All too often our trainers visit work sites only to find people working at height making the same mistake again and again. Is it a minor mistake? No! It is one that would be catastrophic if the worker should fall. Some people think that the number one mistake as a worker operating without safety equipment. Not so!
The number one mistake I see is where companies have incurred the cost of providing safety equipment, however through lack of the required knowledge the worker is using it incorrectly. The worker feels safe but doesn’t know that if he falls his protective equipment will fail.
It would be a tragedy, worse it would be unnecessary.
The number 1 mistake is connector misuse by the site worker.
What does misuse mean?
1. Choking – tying off incorrectly
2. Connecting to an unsuitable anchor point
3. Incorrect directional loading
1. Choking
This is where a site worker is supplied a lanyard, often with a small karabiner at the end. The site worker instinctively passes the lanyard around an anchor point e.g. a column or a beam, using the karabiner to choke i.e. tighten the lanyard around the anchor point.
The problem arises should the worker fall, further tightening the choked lanyard and subsequently applying a shock load inappropriately to the karabiner gate most likely causing the barrel of the karabiner to fail. Karabiners are designed to accommodate tensile (pull) forces along their length and are at their weakest when the load forces are across the minor axis (width) or against the gate.
It is generally accepted that to engineer a connector to withstand the directional loading across the gate of the Karabiner which has been choked during a fall would require a gate strength of 5,000 lbs.
Note that this dynamic loading failure across the gate of the connector applies to all styles of connector i.e. scaffold hook, snap hook, and karabiner.
2. Connecting to an unsuitable anchor point
For example, a roof worker may instinctively connect to an handrail believing this to be a suitable fixing point.
Note! All temporary anchorage points must be able to withstand a 12 kN Load. If in doubt the anchor point should be approved by a structural engineer.
3. Scaffold Hooks
Scaffold hooks are often placed around scaffolding resting on a horizontal member, i.e. the gate of the scaffold hook will be forced open subject to the loading that would be imposed by the horizontal member in the event of a fall. This occurs because the downward direction or loading imposed by the cross-member is across the axis of the gate on the scaffold hook and will result in complete hook failure as the hook gate will subsequently bend open, or in worst-case scenario, will explode.
Summary of connector misuse
Often a lack of understanding of equipment performance and its limitations can result in site workers being issued with inappropriate safety equipment which is not suitable for its intended use.
For example the scaffold hooks are often used where a sling would be a much safer option.
To conclude this section on misuse of connectors, which can have devastating and even fatal consequences; it is important maintenance categories list for a site management, Foreman and stores personnel to be competent to issue the appropriate equipment for the job.
Site workers, generally through lack of training are not aware of what they can do with the simplest of equipment such as connectors. It is therefore essential that both site workers and those managers responsible for height safety are adequately trained to be competent to carry out their duties safely.
Connector misuse is just one of 25 or more total equipment misuse areas commonly seen on site.
Death to the number 1 mistake – not the site worker
How to choose and use connectors. Years of experience on site has convinced me that the answer lies in the following:
1. Sufficient strength and load-bearing capabilities
2. Correct welding helmets discount size
3. Easy to use
4. Lightweight to carry
5. Commercially acceptable
6. Being properly trained to use connectors and associated equipment
Inevitably this often leads back to specifying slings, be they webbing or cable.
These proprietary products have to be PPE items which are CE approved, designed to be an integral component in any fall arrest system and not just a bit of wire which somebody has terminated.
Slings fall into two categories
Wire -cable sling to EN795 – Usually a 1m (but can reasonably be any length) galvanised steel cable, inside a hard but flexible resin jacket, making it more durable from abrasion and corrosion, also protecting the anchorage point from cable abrasion. This type of configuration is commonly used in conjunction with inertia reels.
Webbing slings to EN795 – This is a product which is lightweight and easy to carry around, which adds to its attraction and is relatively inexpensive. It is often used when anchoring to a scaffold pole.
Correct use of scaffold hooks and karabiners
Scaffold Hook
It may be the case that it is easier to tie off with a scaffold hook than a sling and standard karabiner, but a scaffold hook is designed to be suspended off horizontal Anchorage e.g. of a horizontal scaffold tube, ensuring correct directional loading (vertical downward load).
Karabiners
As mentioned earlier karabiners are weakest when they are loaded across or against their gate. This means that it is vitally important that the karabiner is always loaded along its length and never across its width, which would pull against its gate or caused the karabiner to take a force against the gate. So please take care.

See also  How to Choose a Good Electrical Franchise